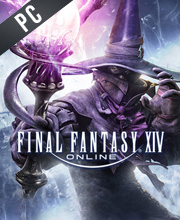 It's a digital key that allows you to download FINAL FANTASY 14 Online directly to PC from the official Platforms.

How can I find the best prices for FINAL FANTASY 14 Online CD keys?

Allkeyshop.com compares the cheapest prices of FINAL FANTASY 14 Online on the digital downloads market to find the best sales and discount codes on trusted stores.

Final Fantasy 14 Online is an MMORPG that lets you play with millions of other players online. Customize your character and get to explore the realm of Eorzea. Get entangled in the story of the Garlean Empire and the Beastmen tribes.

While there’s a lot to consider when building your ideal class, there’s far too little interesting structured content to chew on, resulting in an experience that quickly grows tedious and tiresome.

Final Fantasy 14 Heavensward includes two major plotlines: The Dragonsong War and the tale of “Thordan and his Knights Twelve”. The level cap is increased to 60 and three new jobs have been introduced.

Final Fantasy 14 Stormblood includes the story of Ala Mhigo and Doma who are trying to break free from the Garlean Empire. This comes with six new outdoor zones, two new jobs, new beasts, new raid series, an increased level cap to 70 and the ability to dive underwater.

Final Fantasy 14 Shadowbringers brings players to the region of Norvrandt, specifically to the First. Featuring new enemies, two main hub areas, and two new jobs. Improvements to the battle system are included and the level cap is raised to 80. There are new abilities, new races, and new raids.