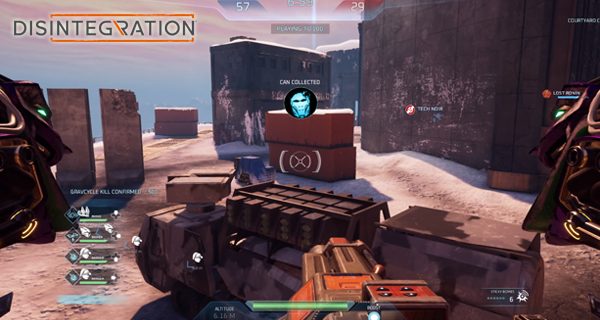 In Disintegration, players are able to pilot a gravcycle which is a hovering vehicle that is heavily armed. While piloting the gravcycle, players are also able to command some AI troops on the ground.

The game comes with a single-player campaign mode as well as a multiplayer mode. The new trailer concentrates on the available modes which are zone control, collector, and retrieval.

Watch the Disintegration new trailer below:

Here’s the rundown of what the modes are about according to the trailer:

Zone Control – Crews compete to control the map by capturing and holding specific areas. A zone is captured when a unit is able to occupy the area without enemy interference. Keep in mind that gravcycles cannot capture zones. Zones can only be captured and contested by ground units.

Collector– Two teams, one objective. Collect as many brain cans as possible before the timer’s up or the limit is reached. Brain cans can come from three sources: enemy gravcycles (3 points), enemy units (1 point) and spawn points around the map. When a can is in play both teams can attempt to pick it up. Friendly brain cans won’t let you earn any points, but obtaining them will prevent your enemies from picking them up for a score.

Retrieval – Players are split up into attacking and defending teams. The goal of the attacker is to retrieve cores from core spawn points and deliver them to a designated drop point near a defender’s base. The goal of the defender is to stop the attackers at all costs. Cores can only be retrieved and carried by ground units. If a ground unit is destroyed while carrying a core, the core will be dropped. You must pick the core up to extend the deliver timer. Failure to retrieve a dropped core in the allotted time will have explosive consequences. After the round teams will swap roles. At the end of the match, the team with the most completed deliveries wins.

Disintegration is set to launch on June 16, 2020, available for PC, PlayStation 4 and Xbox One. Pre-orders are available for the game right now.