December 2016 Game Releases: Hot Games to Warm Up Your Holidays 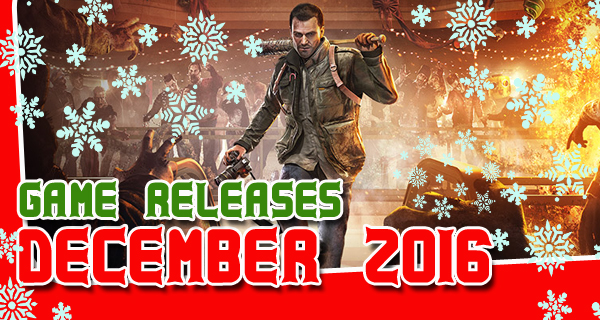 The year is coming to a close, and these December 2016 game releases will surely warm you up this holiday season. It’s definitely been another great year for video games, and the closing month is still packed with awesome games to give you your gaming fix during the holidays.

Don’t forget you can score these at the best price with our price comparison service! Great deals all the time only here at Allkeyshop.com!

Based on the novel with the same title by Markus Heitz, The Dwarves is a role-playing game which boasts of “a strong story and tactically challenging real-time battles.” It features 15 playable heroes that each have their own individual skills. Put your tactical skills to use as you deploy these heroes and use their skills to take on hundreds of enemies. With a captivating story paired with dynamic and real battles, The Dwarves is one game that will surely give you an experience like never before.

If extreme sports is what you’re looking to playing this holiday season, then Steep will be the perfect choice for you! Freely explore the Alps or Alaska in an open world setting. Choose whether you want to ski, paraglide, snowboard, or use a wingsuit to traverse the mountain. Rip through snowy terrains, explore and discover hidden spots, or you can simply breathe all the beauty of your surroundings in. There are also a wide array of challenges waiting for you, so challenge your friends and show off your skills!

Developed exclusively for VR devices, Arizona Sunshine will surely bring a whole new level of fear and survival as you battle hordes of zombies in virtual reality. The game includes a real-life weapon handling feature which you can use through a VR motion controller. You’ll also get to explore your surroundings freely using your VR headset. Its game modes will also give you the adrenaline rush you need as you go through its single player campaign, or play with friends in its co-op multiplayer. If you’re up for a challenge, then go ahead and take on its survival mode and see how long you will last.

Dead Rising 4 brings back retired photojournalist Frank West to Willamette, Colorado. A mysterious new outbreak has created deadly predators which have surrounded the town and its newly built mall. It looks like West is not going to have the holidays to himself, as he needs to uncover a government conspiracy that’s responsible for the said outbreak. Aside from that, he’ll get to discover quite a number of things that will surely keep him very busy trying to keep himself alive.

Realm of the Wood Elves is the biggest Total War Warhammer expansion SEGA has released to date. This DLC will bring the New Wood Elves Race in its Grand Campaign, the new race-specific currency Amber, two new playable characters (Durthu and Orion), as well as two new Lord types and three Hero types. Both the new characters and hero types have deep-specialisation skill trees. An additional campaign map will also be added to the game, including the Seasons of Revelations Wood Elves Campaign.

Based on the classic Space Hulk board game by Games Workshop, Space Hulk Deathwing is a first-person shooter set in the universe of Warhammer 40,000. You will play as a Space Marine from the Deathwing of the Dark Angels Chapter. As a Space Marine, you’ll get to don the Terminator armor and arm yourself with awesome iconic weapons of the Space Marines. Take on the lethal Genestealers and show them who’s boss in the game’s solo campaign, or play with up to three of your friends in its epic cop mode!

If you’re up for an adventure, then The Little Acre will surely bring you a memorable one. The game features two playable characters, Aidan (the father) and Lily (the daughter), and is set in the year 1950’s in Ireland. As Aidan discovers clues that lead to his missing father,  he begins investigating until he finds himself in a strange new world. His daughter, Lily, goes after him and gets to encounter her own problems along the way. Will the two get to meet each other again? Well, you’ll just got to see for yourself.