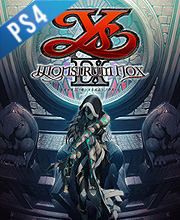 It's a digital key that allows you to download Ys IX Monstrum Nox directly to Playstation 4 from PSN (Playstation network).

Allkeyshop.com compares the cheapest prices of Ys IX Monstrum Nox on the digital downloads market to find the best sales and discount codes on trusted stores.

Ys IX: Monstrum Nox is an action JRPG the 9th game of the long-running Ys Franchise, the series protagonists Adol and his companion Dogi returns to take their adventure to Balduq city but even before they could step inside it Adol is arrested while being imprisoned he meets a mysterious woman named Aprilis who curses him and turns him into a Monstrum a being with supernatural powers and the ability to exorcise monsters. Find and ally with the other Monstrum in the city and defend it from other supernatural threats and find out more about the curse Aprilis puts on you.

Where Ys VIII took the series so close to becoming something that I could love, Ys IX gets it there. It tells a strong story with vibrant characters, has a great setting, gorgeous aesthetics, and slick combat, and most importantly, it balances all of that out in a way that is nuanced and engaging.

Ys IX: Monstrum Nox is some of the most fun I have had within the action-JRPG genre, period. The adventure includes everything you could ask from the series, with the addition of an addicting game loop, a well-written character-driven narrative, a stellar soundtrack, and great controls. This is not a title to be slept on.

This Edition contains the base game on a physical disc and collector’s memorabilia items.