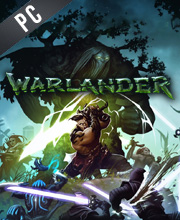 What is Warlander CD key?

It's a digital key that allows you to download Warlander directly to PC from the official Platforms.

How can I find the best prices for Warlander CD keys?

Allkeyshop.com compares the cheapest prices of Warlander on the digital downloads market to find the best sales and discount codes on trusted stores.

Use a special style that combines a medieval-inspired backdrop, fantastical equipment and skills, and even potent robots to summon the immense powers of god-like Warriors, Clerics, and Mages! Learn to command the battlefield and cast devastating spells to destroy the enemy’s center!

At the end of the day, you’ll probably have fun with Warlander if you’re a fan of Team Death Match style games. Whether that means Mordhau or a first-person shooter like Team Fortress 2, the action is chaotic and the deaths aren’t punishing so you can always just sign in and get to fighting, and you should.

Warlander is a disappointing experience that fails to capture the pleasures of a roguelike game. The combat is unpolished and sluggish and it is rife with poor animations and unfinished assets and elements. Outside of the dismemberment, there’s little here worth seeing.