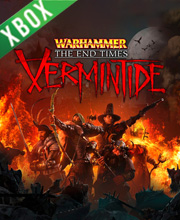 It's a digital key that allows you to download Warhammer End Times Vermintide directly to Xbox One from Xbox Live.

How can I find the best prices for Warhammer End Times Vermintide on Xbox one?

Allkeyshop.com compares the cheapest prices of Warhammer End Times Vermintide on the digital downloads market to find the best sales and discount codes on trusted stores.

I will just say that anyone should just buy this one, it’s bloody epic, let’s see:

Epical and visceral melee combat with good ranged combat also, nevertheless, the melee is the king here no other game that comes to my mind recently did such a good job portraying this satisfying yet simple to learn hard to master melee combat with a very good feedback on the moves and the weapons themselves

Epic heroes that are really different in lot of aspects the most important are character and gameplay for example the elf is a killer with bow and arrow, the Dwarf excels on holding the front line even tough both can do proper melee and shooting on their own their different combat skills offer different strengths, tactics and handling.

Epic enemies that are very numerous and on the later difficult levels tactics are essential to survive since they are so numerous and they like to swarm and thanks to the A.I. they get different spawn locations each time you do a level so it’s always some what different.

Some proper DLC and constant improvement by the developers makes the game always going forward.

The downside? there aren’t a lot of players but you can still get a party easily at least to this date.

It’s a very good game, one of the few good Warhammer games good for fans of the series or not and a blast to play with friends

Very Recommended by me