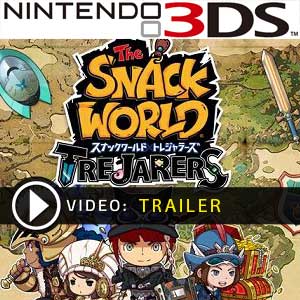 The Nintendo 3DS Game Code displayed are safe and our staff test them frequently.

You can participate to these tests by adding comments about your Nintendo 3DS Game Code purchase in the store review page. Enjoy the best deals for The Snack World Trejarers Game Download Code with Allkeyshop.com!

The Snack World Trejarers is a role-playing video game that is published and developed by Level 5.

Through Chup’s adventures, he meets Princess Melora, the King Majesty’s daughter and falls madly in love with her. He joins her as she loves going on quests with a witch named Mayone, a strong warrior named Pepperon, Gobsan which looks like a goblin and Francene a female dragon who has a pig nose.

Crazy adventures will be yours when you play The Snack World Trejarers.

JAPAN BOX GAME : This is a Japan import of The Snack World Trejarers Nintendo 3DS in Box Edition (DVD-CD ROM). This is not a downloadable product. Please read the sellers page for any additional costs (taxes, shipping), delivery time for your country and languages available.
Standard Edition. Read the store description to know the content.

Be the first one to write a review about The Snack World Trejarers !