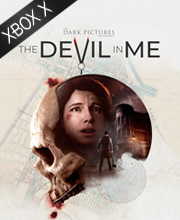 What is The Dark Pictures Anthology The Devil in Me Game Code?

It's a digital key that allows you to download The Dark Pictures Anthology The Devil in Me directly to Xbox Series X from Xbox Live.

How can I find the best prices for The Dark Pictures Anthology The Devil in Me on Xbox Series X ?

Allkeyshop.com compares the cheapest prices of The Dark Pictures Anthology The Devil in Me on the digital downloads market to find the best sales and discount codes on trusted stores.

The Dark Pictures Anthology: The Devil in Me is a branching cinematic horror game developed by Supermassive Games the studio behind Until Dawn, The Quarry, etc. the fourth game in the series and is considered to be the finale for this season of The Dark Pictures Anthology. A group of documentary filmmakers receives a mysterious call inviting them to an opening of a recreation of the infamous serial killer H.H. Holmes “Murder Castle”. It’s an opportunity that’s too good to pass, and could just be the thing they’re looking for to get some public interest. But things aren’t quite as they seem, the crew discovers they are being watched and even meddled with, suddenly there’s much more at stake than just their views.

The Devil In Me is a solid round-off to Season One of The Dark Pictures Anthology. It has some of the best character and story work so far, with gruesome, inventive horror that kept us on our toes. Once the online woes are sorted we’ll be jumping back in for another go, and can recommend fans alike do the same.

Without a doubt, this is the best Dark Anthology game so far and a true climax to season one. Not only fans of the series but fans of the genre will love playing this. The acting, visual detail, sound design and writing could not be bettered here.

The Devil in Me is the most assured entry yet in The Dark Pictures Anthology.