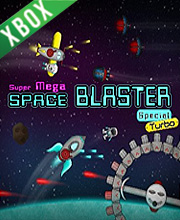 It's a digital key that allows you to download Super Mega Space Blaster Special Turbo directly to Xbox One from Xbox Live.

How can I find the best prices for Super Mega Space Blaster Special Turbo on Xbox one?

Super Mega Space Blaster Special Turbo is a fast-paced frantic blast of a shoot ’em up game that was published and developed by Bare Knuckle Development for the Xbox One. The game features numerous game modes, ships, challenges, upgradeable power-ups and more. You can always elect to indulge in the interstellar frantic retro blasting activities alone, or you can have friends join you in local co-op. According to the critics, the game highly addictive and will have you playing into the wee hours of the night. Collect coins to unlock all 15 space blasters (ships) each with unique perks. Grab a copy, hop in and enjoy endless high-score chasing gameplay with over 15 enemies. You may even trade blows with a boss should you survive long enough; at which point, you will have to endure its wrath while issuing punishment of your own. Over 40 in-game challenges to help you gain coins and develop your space blaster piloting skills. Super Mega Space Blaster Special Turbo also features a simple hand-drawn art-style that makes enemies stand out and are never lost among the asteroids. Become the greatest space blaster pilot in the leaderboards.