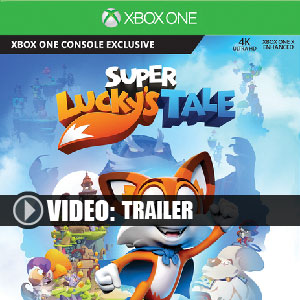 It's a digital key that allows you to download Super Lucky's Tail directly to Xbox One from Xbox Live.

How can I find the best prices for Super Lucky's Tail on Xbox one?

Allkeyshop.com compares the cheapest prices of Super Lucky's Tail on the digital downloads market to find the best sales and discount codes on trusted stores.

Super Lucky’s Tale is a 3D video game developed by Playful and published by Microsoft Studios. It was announced at E3 2017 and it features a part of the Play Anywhere program.

The game contains a lot of fun for players, plus surprise levels and lots of places that are challenging Lucky to use his skills, also with puzzles games and many other.

The story begins with the words of Lyra, telling us about her younger brother who is about to start his own adventure and also about Jinx and The Kitty Litter that have the same purpose as she does.

This young fox, sacrifice himself and gets captured in the fantasy world of the Book of Ages. Follow Lucky into the four worlds, each making you go through at least 5 levels.

Enjoy the adventure and make Lucky help his sister, rescue the book and save the world in the Super Lucky’s Tale game.