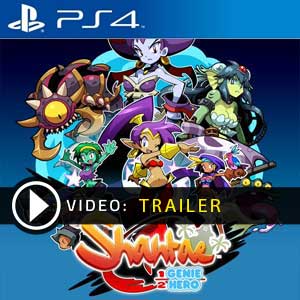 It's a digital key that allows you to download Shantae Half-Genie Hero directly to Playstation 4 from PSN (Playstation network).

Allkeyshop.com compares the cheapest prices of Shantae Half-Genie Hero on the digital downloads market to find the best sales and discount codes on trusted stores.

Shantae: Half-Genie Hero is a platformer video game that is developed and published by WayForward Technologies.

This is the game that came next from Shantae and the Pirate’s Curse and is also the fourth that came from the Shantae series.

Risky Boots is up to no good once again and Shantae the half-genie is the only one who can help! The mayor of Scuttle Town, however, fired Shantae as the town’s guardian genie since Risky was able to escape and damage was done to the town.

So Shantae is on her own to search for Risky and prove her worth once again. She is joined by her friends Sky, Bolo, and Rottytops for the first time are playable and each one will have their own stories and gameplays!

Set out with a grand new adventure with Shantae and the gang in Shantae: Half-Genie Hero.
Shop
Platform
Edition
Price (without fees)
Fees
AKS SCORE
8.2
Loading offers...
There's currently no offer for this game.
Show more offers Show all offers