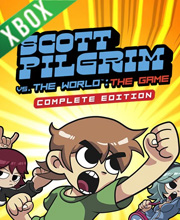 What is Scott Pilgrim vs The World The Game Game Code?

It's a digital key that allows you to download Scott Pilgrim vs The World The Game directly to Xbox One from Xbox Live.

How can I find the best prices for Scott Pilgrim vs The World The Game on Xbox one?

Allkeyshop.com compares the cheapest prices of Scott Pilgrim vs The World The Game on the digital downloads market to find the best sales and discount codes on trusted stores.

Scott Pilgrim vs. The World Complete Edition is a 2D arcade-style beat ’em up game inspired by the movie and comic book series of the same name. The complete edition includes all your favorite characters, DLCs and Add on Packs. Defeat the League of the Evil Exes of Ramona.

Scott Pilgrim Vs The World is an absolute must have if beat ’em ups are your type of game. The action packed co-op mixed with Anamanaguchi’s soundtrack sets the mood perfectly. Although it takes some time to learn and nail down some combos once you get the hang of things you’re sure to have a smashing time.

The title features exceptional pixel art with dozens of clever easter eggs, special modes like a survival horror experience and dodgeball, and even rounds things out with a frankly spectacular chiptunes soundtrack composed by Anamanaguchi. It hasn’t aged a single day since its first release back in 2010, though it does suffer because of a gap in new Scott Pilgrim content since 2014 and 2021.