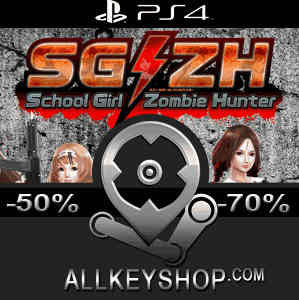 It's a digital key that allows you to download School Girl/Zombie Hunter directly to Playstation 4 from PSN (Playstation network).

Allkeyshop.com compares the cheapest prices of School Girl/Zombie Hunter on the digital downloads market to find the best sales and discount codes on trusted stores.

Set in a Japanese private institute, the game brings a sudden massive zombie invasion. Five girls managed to survive the invasion but they still have to fight against zombies with many weapons such as common Baseball bats, machine guns, sniper rifles or even rocket launchers. Each character has her own skills. When the five young girls are in danger, they can throw their costumes to zombies. That’s a way to diverte the zombie’s attention. For that reason, the game is target as 17+ in Japan because of the violence and even sexual contents. Five players can play together through multiplayer.

The cast is divided between shy types and badasses. But they have one thing in common, their desire to escape the school where they’re stranded. The playable characters are: Sayuri Akiba, Risa Kubota, Mayaya Himeji, Enami Kamijo and Rei Kanazaki.

So, here you have a story that focuses around these five ladies and their battle with the adorably named, zom-zoms.

JAPAN BOX GAME : This is a Japan import of School Girl Zombie Hunter PS4 in Box Edition (DVD-CD ROM). This is not a downloadable product. Please read the sellers page for any additional costs (taxes, shipping), delivery time for your country and languages available.
PLAYSTATION CODE : This a Playstation Game Code to download School Girl Zombie Hunter PS4. Activate the code on the Playstation Network. Read carefully the store description about any language and region restrictions.
Limited Edition
Standard Edition