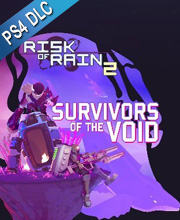 What is Risk of Rain 2 Survivors of the Void Game Code?

It's a digital key that allows you to download Risk of Rain 2 Survivors of the Void directly to Playstation 4 from PSN (Playstation network).

Allkeyshop.com compares the cheapest prices of Risk of Rain 2 Survivors of the Void on the digital downloads market to find the best sales and discount codes on trusted stores.

Risk of Rain 2: Survivors of the Void is the first DLC for the action roguelike game Risk of Rain 2, the gateway to the void has opened, its corrupting energy is now spewing out across Petrichor V, Void creatures have also taken interest in the planets artifacts and took them back to their realm corrupting them, now they look towards you to add to their collection. Two new Survivors are coming to defend the planet from the threat of the void the Railgunner a powerful sniper that can deal tremendous amounts of damage from far away and Voidfiend a corrupted commando that can turn the powers of the void against itself, let it overtake you to deal tons of damage close range or contain it to be able to attack from long range.