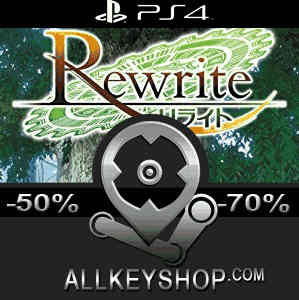 What is Rewrite Game Code?

It's a digital key that allows you to download Rewrite directly to Playstation 4 from PSN (Playstation network).

Allkeyshop.com compares the cheapest prices of Rewrite on the digital downloads market to find the best sales and discount codes on trusted stores.

Rewrite is an action visual novel video game developed by Key and published by Prototype. Much of the time spent in the game is reading the story’s narrative and dialogue, hence it is called a visual novel.

Set in the city of Kazamatsuri, you will play the role of Kotarou Tennouji who is a highschool student. Kotarou is not like any normal human being since he has supernatural abilities. He, along with five of his friends discover a conflict between superhumans and familiar summoners leaving the fate of the world hanging in the balance.

The game follows an interactive branching plot line that leads to 8 main plot lines. Throughout the game, players would need to make decisions that will lead to any of the multiple endings.

Kotarou’s ‘rewrite’ ability is seen in the bottom left corner. The outcome of that ability is based on how much the dial has moved and can be determined as well through certain scenes.