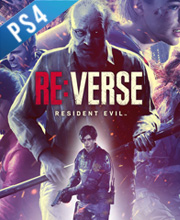 It's a digital key that allows you to download Resident Evil Re:Verse directly to Playstation 4 from PSN (Playstation network).

How can I find the best prices for Resident Evil Re:Verse on Playstation 4

Allkeyshop.com compares the cheapest prices of Resident Evil Re:Verse on the digital downloads market to find the best sales and discount codes on trusted stores.

Beloved Resident Evil characters clash in a fight to the death! Test your skills against other players in six-person deathmatch battles. But don’t forget the terrifying bioweapons! You’ll need to master the skills of the heroes and bioweapons alike if you want to claw your way to victory!

Resident Evil Re: Verse is an upcoming multiplayer game from the Resident Evil franchise that features third-person over-the-shoulder multiplayer action with characters from the said franchise. Four to six players take part in 5-minute deathmatch battles, using weapons and items found through the map, with the player scoring the most points at the end of the match-winning. Each Human character has their own set of skills and weapon loadout.