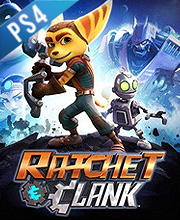 What is Ratchet and Clank Game Code?

It's a digital key that allows you to download Ratchet and Clank directly to Playstation 4 from PSN (Playstation network).

Allkeyshop.com compares the cheapest prices of Ratchet and Clank on the digital downloads market to find the best sales and discount codes on trusted stores.

Save the Solana Galaxy from the evil hands of Chairman Drek. Join Ratchet (a cat-like character called a Lombax and who is also a mechanic), Clank (a petit Zoni robot who is capable of feeling emotions), Captain Quark (a hero who is actually cowardly and fraudulent) also with some new friends that you will meet along the way.

The game modernizes the old mechanics of the original gameplay. This will also let you delve deeper into each character’s stories. Everything is flashy and new with Ratchet & Clank: new planets, new gameplay segments, new bosses, new fight sequences and so much more.

The game’s amazing arsenal line up will blow your mind. Like the Pixelizer which will turn your enemies into 8-bit pixels or the Groovitron which will make your enemies dance, dance, dance nonstop. Amazing weapons as well as a great gameplay awaits in Ratchet & Clank.