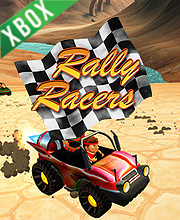 What is Rally Racers Game Code?

It's a digital key that allows you to download Rally Racers directly to Xbox One from Xbox Live.

How can I find the best prices for Rally Racers on Xbox one?

Allkeyshop.com compares the cheapest prices of Rally Racers on the digital downloads market to find the best sales and discount codes on trusted stores.

The game’s slogan “Where road rage becomes raging fun!” is a solid indication as to what the game entails.

Rally Racers encourages competitive and or cooperative play as players race amongst themselves in a fast and furious frenzy. Acquire tricks and do flips while accumulating boosts and weapons to form an arsenal with which you battle for glory.