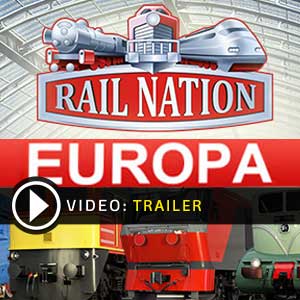 It's a digital key that allows you to download Rail Nation Europa directly to PC from the official Platforms.

How can I find the best prices for Rail Nation Europa CD keys?

Allkeyshop.com compares the cheapest prices of Rail Nation Europa on the digital downloads market to find the best sales and discount codes on trusted stores.

Rail Nation will now have all new European content. The European scenario will not only have a new map but all new features as well.

The European map will be made as realistic as possible with the new map editor. Tunnels will now also be included in the new editor. A new feature will also be the game’s user interface which would now resemble that of the mobile version.

10 regions are available to choose from for the battle of being the best in the railway business. Each region will have 5 cities, there will be a total of 50 European megacities all in all. Each city will feature their original landmark, like for Paris will be the Eiffel Tower.

The game will not only have trains but ships and harbours as well. All 10 regions will have a harbour in each. The harbours would have unlocked goods which can be collected or delivered from harbour to harbour.

Do you have what it takes to be the biggest railway business in all of Europe?

PUBLISHER WEBSITE CD KEY: Use the CD Key Code to download directly on the Official Website or from the store to play Rail Nation Europa. Follow the instructions given by the store. Verify languages available and possible region restrictions before buying.
Bonus Edition