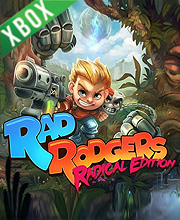 What is Rad Rodgers World One Game Code?

It's a digital key that allows you to download Rad Rodgers World One directly to Xbox One from Xbox Live.

How can I find the best prices for Rad Rodgers World One on Xbox one?

Allkeyshop.com compares the cheapest prices of Rad Rodgers World One on the digital downloads market to find the best sales and discount codes on trusted stores.

Rad Rodgers: World One is an action–adventure-platformer game published by HandyGames and developed by Slipgate Ironworks for the Xbox One. With this game, the developers aim to bringing back the 90’s-era style of PC platformer games. Upon closer inspection, the inspiration from classics like Commander Keen becomes even more so apparent.

In the game, you play as Rad, a rambunctious but spirited young lad.

Rad is a borderline video game addict who falls asleep at the end of a long gaming session. He awakens to discover that his dusty old console has turned itself back on. Suddenly a vortex spawns sucks him into his TV, where he finds himself the protagonist in his very own video game adventure.