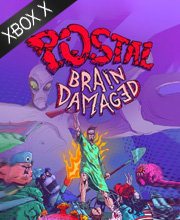 It's a digital key that allows you to download POSTAL Brain Damaged directly to Xbox Series X from Xbox Live.

How can I find the best prices for POSTAL Brain Damaged on Xbox Series X ?

Allkeyshop.com compares the cheapest prices of POSTAL Brain Damaged on the digital downloads market to find the best sales and discount codes on trusted stores.

POSTAL: Brain-Damaged is an action-packed boomer shooter spin-off of the much-beloved postal franchise developed in cooperation with Hyperstrange and CreativeForge Games famous for their work on the hit games Elderborn and Blood West. This iteration will take you further down the rabbit hole than any previous game of the series because you’re not in paradise anymore, and things are getting weird while you explore the twisted psyche of the Postal Dude, himself!