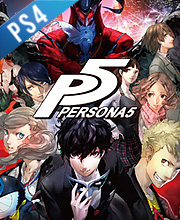 What is Persona 5 Game Code?

It's a digital key that allows you to download Persona 5 directly to Playstation 4 from PSN (Playstation network).

Allkeyshop.com compares the cheapest prices of Persona 5 on the digital downloads market to find the best sales and discount codes on trusted stores.

Persona 5 is a role-playing video game developed and published by Altus. This is the sixth installment to come out of the Persona series.

Get a chance to rid the people of their distorted desires in Persona 5. By day, play the role of an innocent high school student who lives a normal life and does whatever he pleases. By night put on the mask and you are a Phantom Thief with the group Phantom Thieves of Hearts. With the help of your Metaverse Navigator smartphone app, you are transported into a different world where you can search for the hearts of corrupt adults and steal the Treasure of their distorted desires. A reformed society is ahead of you in Persona 5.

Build up character relationships called “Cooperations” and go on the game’s dungeon explorations. As with the previous Persona games, the battles are still turn-based. A minor multiplayer element has also been added called the “Phantom Thieves Alliance” network. Here, you can send messages to each other in order to aid battles affecting your Alertness Metre.

A huge adventure awaits in Persona 5, make sure you are up for it.

This is a good game, realy funny whit good gameplay and storyline!

People are saying great things about this game. I want to try it.

This is a great game, but in my opinion it’s too expensive. If the price was lower, i would buy it!