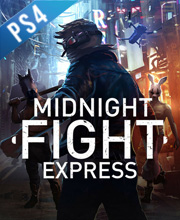 It's a digital key that allows you to download Midnight Fight Express directly to Playstation 4 from PSN (Playstation network).