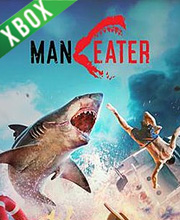 What is Maneater Game Code?

It's a digital key that allows you to download Maneater directly to Xbox One from Xbox Live.

How can I find the best prices for Maneater on Xbox one?

Allkeyshop.com compares the cheapest prices of Maneater on the digital downloads market to find the best sales and discount codes on trusted stores.

Experience the ultimate power as the apex predator of the seas – a giant Shark!

Tripwire has crafted a fantastically balanced experience that knows when enough is enough and is genuinely funny, something many games aim for but so few succeed in reaching. Maneater is an ideal palate cleanser for those suffering from ‘open-world’ fatigue and, despite its perfect size, still left me wanting more.

Maneater on Xbox One is bloody brilliant. It’s a massive game with a lot to do and a huge amount of content to discover – the locations or beauty spots are usually wittily scripted, and have quite a few nods to popular culture as well, making them entertaining asides. What’s more, there is a good story of revenge to follow.

Tripwire Interactive has managed to capture what it feels like to be Jaws, right down to jumping out of the water, landing on a boat, and chomping away at the hunters on it. That in and of itself is a momentous achievement to accomplish.