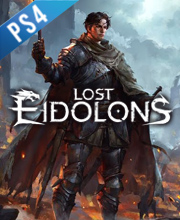 What is Lost Eidolons Game Code?

It's a digital key that allows you to download Lost Eidolons directly to Playstation 4 from PSN (Playstation network).

Allkeyshop.com compares the cheapest prices of Lost Eidolons on the digital downloads market to find the best sales and discount codes on trusted stores.

Play as Eden, a charming mercenary captain compelled to take command of the rebels after his village is thrown into conflict. In order to defend himself against an imperial army, terrifying monsters, and internal enemies, Eden must now rally his allies.