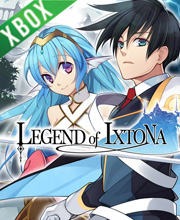 What is Legend of Ixtona Game Code?

It's a digital key that allows you to download Legend of Ixtona directly to Xbox One from Xbox Live.

How can I find the best prices for Legend of Ixtona on Xbox one?

Allkeyshop.com compares the cheapest prices of Legend of Ixtona on the digital downloads market to find the best sales and discount codes on trusted stores.

Legend of Ixtona is a turn-based JRPG developed by WorldWideSoftware throw yourself into the rich world of Ixtona, a land that has seen a long history of war and strife, only recently they have found peace because of the actions of a wise king, but some people conspire and plot for the throne threatening to end the peace. Play as the Prince of Ixtona Kyle as his actions ultimately decide the fate of his father’s kingdom.

Legend of Ixtona is a solid SRPG that genre newcomers and nostalgic old farts like me can equally enjoy. From its simple yet satisfying battles to its interesting equipment acquisition mechanics, there’s certainly a lot to keep you entertained.