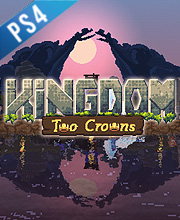 It's a digital key that allows you to download Kingdom Two Crowns directly to Playstation 4 from PSN (Playstation network).

Allkeyshop.com compares the cheapest prices of Kingdom Two Crowns on the digital downloads market to find the best sales and discount codes on trusted stores.

Kingdom Two Crowns is a side-scrolling minimalist strategy game wrapped in a beautiful pixel art aesthetic developed by Stumpy Squid, Fury Studios, and Coatsink. Play the role of a monarch and ride everywhere with your royal steed and recruit loyal subjects, build your kingdom and protect it from creatures who are looking to steal everything you own. In the game’s brand, new campaign mode monarchs must work together to build a kingdom that stands the test of time. Explore environments to discover new mounts that are hidden in the deep.

Kingdom Two Crowns is an immersive and frequently surprising strategy game that is quite unlike any other. Fans of slow-burning, atmospheric strategy efforts with emergent discovery will find much to enjoy here – as would newcomers to the genre at large.

Kingdom Two Crowns is not for those seeking out a traditional strategy or management game. It merely skirts the edges of the genre to present a unique vision of how this type of game may play out from a different perspective. Intense and difficult moments are often traded out for a serene blend of exploration and discovery.

This Edition of Kingdom Two crowns contains the base game and Kingdom Treasury Collection which includes the Norse Lands DLC and Kingdom: New Lands.

A new campaign that will take you to a land inspired by Norse Viking culture in 1000 C.E, it expands the world of the base game and unleashes powerful abilities drawn from the Norse gods, commands mighty units, makes use of mighty Viking-inspired armaments, solves challenging puzzles, and face new enemies of greed.