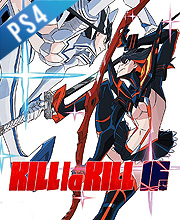 You can participate to these tests by adding comments about your PS4 Game Code purchase in the store review page. Enjoy the best deals for Kill La Kill IF Game Code with Allkeyshop !

Kill la Kill is an action fighting game that was published by Arc System Works and developed by A+ Games for the PlayStation 4.

This game is based on the hit critically acclaimed anime title of 2013. Now Kill La Kill has returned as an action-packed fighting game and brings with it, notalgia and captivating gameplay. In the game, you pilot Satsuki Kiryuin who is the main protagonist. According to the developers, you can expect a thrilling story as you ascend the ranks battling a variety of characters. Rest assured that all of the scenarios are entirely new and are guided by the original scenario-writer, Kazuki Nakashima. The story is not without twist and turns, leaving pressing questions to be answered. The journey to the truth is tedious but very much rewarding. The game offers single and online multiplayer. However, bear in mind that the full game requires PlayStation Plus membership to access online multiplayer.

Be the first one to write a review about Kill La Kill IF !