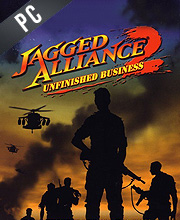 It's a digital key that allows you to download Jagged Alliance 2 Unfinished Business directly to PC from the official Platforms.

How can I find the best prices for Jagged Alliance 2 Unfinished Business CD keys?

Allkeyshop.com compares the cheapest prices of Jagged Alliance 2 Unfinished Business on the digital downloads market to find the best sales and discount codes on trusted stores.

Jagged Alliance 2 is a tactical role-playing game, developed by Sir-Tech Canada and published by Talon Soft.

The game uses a strategic map screen of Arulco where player may issue high level strategic orders for their troops, such as travelling or prolonged training. Combat and individual location exploration takes place in tactical screen, where the player can issue individual direct commands to their mercenaries, such as run, shoot, talk and so on. The game features a wide variety of guns, armour, and items that the player may use.

Jagged Alliance 2: Unfinished Business, alternatively known as Jagged Alliance 2.5 is a short, mission-based standalone sequel released by Sir-Tech. This release adds some tweaks to the combat engine, as well as a scenario editor, yet the gameplay remain largely unchanged.

A new plot is introduced in Unfinished Business. The original owners of Arulco’s lucrative mines have returned and established a missile base on the nearby island of Tracona, demanding the mines are returned to them. They destroy the Arulco’s now empty Tixa prison to show an example for if their demands are not met.

The player must put a team of mercenaries together to infiltrate Tracona and disable the missile base. Alternatively, the player may chose to use the characters from a previously saved Jagged Alliance 2: Gold savegame. Unfinished Business is notably harder than the original.

nice indie oldstyle game … buy only if you like those kid of games.. price is fair