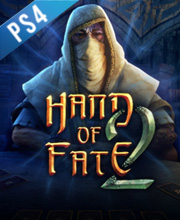 What is Hand of Fate 2 Game Code?

It's a digital key that allows you to download Hand of Fate 2 directly to Playstation 4 from PSN (Playstation network).

Allkeyshop.com compares the cheapest prices of Hand of Fate 2 on the digital downloads market to find the best sales and discount codes on trusted stores.

Enter the dealer’s carriage once more in Hand of Fate 2 is a dungeon crawler, part deck building, with the combat of an action RPG game. The dealer has returned 100 years after his defeat and the game of life and death has resumed. The game of life and death is the living board game you and the dealer play your entire life has been condensed into the deck, you build it by adding companions, encounters, and weapons while the dealer also mixes his own cards into yours creating unique scenarios you have to beat.

Defiant Development has proven that Hand of Fate was neither a one-off hit, nor that it couldn’t be expanded on in a meaningful way. Hand of Fate 2 retains the aesthetics and soul of the original game, but builds on the world’s lore, its mechanics, and its art in such a way that the two games feel generations apart.

Defiant Development is a Dungeon Master getting better at their craft, taking us through a series of campaigns filled with new mysteries, twists, turns, and mechanics. Not content with just polishing up the formula of the original game, Hand of Fate 2 takes a step forward and defines what a sequel should be.

Hand of Fate 2 Outlands and Outsiders

Hand of Fate 2 The Servant and the Beast

Hand of Fate 2 A Cold Hearth

PLAYSTATION CODE : This a Playstation Game Code to download Hand of Fate 2 PS4. Activate the code on the Playstation Network. Read carefully the store description about any language and region restrictions.
Standard Edition