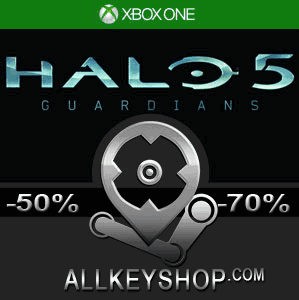 What is Halo 5 Guardians Game Code?

It's a digital key that allows you to download Halo 5 Guardians directly to Xbox One from Xbox Live.

How can I find the best prices for Halo 5 Guardians on Xbox one?

Allkeyshop.com compares the cheapest prices of Halo 5 Guardians on the digital downloads market to find the best sales and discount codes on trusted stores.

Halo 5: Guardians is a first person shooter (FPS), published by Microsoft Studios and developed by 343 Industries on Xbox One.

This is the ninth installment in the Halo series is scheduled for 27 October 2015. It is also the second episode of the second Halo saga that began in 2012 with Halo 4 for Xbox 360.

In this live-action series, created by 343 Industries and Scott Free Productions, agents belonging to the elite of the ONI expose themselves to extreme hazards in a strange and dangerous world where a new mysterious and unstoppable force threatens the galaxy, Master Chief John-117 disappeared and his loyalty is questioned.

Dive into the darkest episode of the saga in a co-op campaign where you can play with up to 4 players and leads you in 3 different worlds. The combat zone is a new large-scale multiplayer mode that offers up to 24 battles between players. It will be an experience constantly renewed through permanent intervention of allied and enemy AI during the game.

You can also enter in the heat of the battle with Spartans, Covenant and Forerunners while achieving maximum targets of all kinds. In Halo 5: Guardians, the multiplayer arena will embody the quintessential Halo tradition in the field of fighting and a competitive spirit will be your best allie. A game not to be missed as the graphics and game play are at the superior level we have come to expect from this game series.

Great game from the Halo Saga, good and cheap game, +1

OMG, this game have so good graphics. Looks awesome

Best game from Valve yet! Get yours from GK4.me, Highly recommended