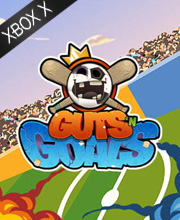 It's a digital key that allows you to download Guts ’N Goals directly to Xbox Series X from Xbox Live.

How can I find the best prices for Guts ’N Goals on Xbox Series X ?

Allkeyshop.com compares the cheapest prices of Guts ’N Goals on the digital downloads market to find the best sales and discount codes on trusted stores.

Guts N’ Goals is a multiplayer sport’s/beat em’ up hybrid developed by indie studio CodeManu, take on bots or other human players in a violent game of soccer but instead of using your feet to kick the ball, you use weapons that can also be aimed at the opposing teams’ players. Choose from 30 characters to play as each with their own unique skills and characteristics.

In the here and now, Guts ’N Goals is fun in short bursts, at least solo. There’s a ton of stuff to unlock, the match types are fast and hectic and the extra modes prove to be a great way of mixing things up. It’d make a great addition to a local multiplayer night again in the near future, and once online play is there’ll be more incentive to keep returning.