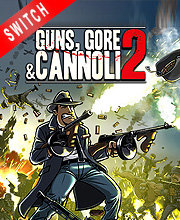 It's a digital key that allows you to download Guns Gore and Cannoli 2 directly to Nintendo Switch directly from Nintendo eShop.

How can I find the best prices for Guns Gore and Cannoli 2 on Nintendo Switch ?

Guns, Gore & Cannoli 2 is a worthwhile experience. It’s the perfect game to plop down on the couch and run through on a weekend. Heck, you could probably even do it in a single sitting. There are plenty of weapons and enemy variety.

What fans of the first game ultimately hankered for has made its way into this sequel, and quite rightly so, with this new title overcoming some of those baffling design decisions. Make no mistake, though, newcomers to the franchise will find it easy to get sucked into the small but impressionable world of Guns, Gore & Cannoli 2.

Zoom 1m 3m 1y All
Track product
NINTENDO CODE : This is a digital code for Guns Gore and Cannoli 2. Use the download code on the Nintendo eShop of your Console. Once connected to the Nintendo eShop, you can enter and redeem the Download Code. Read carefully the store description about any language and region restrictions.
Standard Edition
Compare Choose & Buy Download (772)