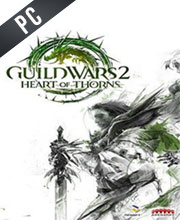 What is Guild Wars 2 Heart of Thorns CD key?

It's a digital key that allows you to download Guild Wars 2 Heart of Thorns directly to PC from the official Platforms.

How can I find the best prices for Guild Wars 2 Heart of Thorns CD keys?

Allkeyshop.com compares the cheapest prices of Guild Wars 2 Heart of Thorns on the digital downloads market to find the best sales and discount codes on trusted stores.

Guild Wars 2 is a massively multiplayer online role-playing game developed by ArenaNet and published by NCsoft.

Set in the fantasy world of Tyria, the game follows the re-emergence of Destiny’s Edge, a disbanded guild dedicated to fighting the Elder Dragons, a Lovecraftian species that has seized control of Tyria in the time since the original Guild Wars. The game takes place in a persistent world with a story that progresses in instanced environments.

Guild Wars 2 uses a heavily modified version of the proprietary game engine developed for Guild Wars by ArenaNet. The modifications to the engine include real-time 3D environments, enhanced graphics and animations and the use of the Havok physics system.

The developers say the engine now does justice to the game’s critically acclaimed concept art, and that concept art will be integrated into the way the story is told to the player.

Guild Wars 2: Heart of Thorns is the first expansion pack for Guild Wars 2. The expansion will introduce new group challenges, new profession specializations, a new profession, and an account-based “mastery” system for character progression through the new territories featured in it, as well as make changes to current player versus player content. Get ready to journey the world of Tyria!

Pre Order Bonus: Get the pre order version of the beta access of Guild Wars 2 Heart of Thorns .

For those who are not aware: This is the first of currently two expansions for the game. If you buy the second one (Path of fire), you will automatically get the first one (THIS) for free once you activate it in your game account.

I have been wanting this since it came out. Maybe the next win any game you want contest will give it to me lol

Looking at this game and it`s good price I am thinking of starting it over AA.

I think this game can beat LoL and WoW. And you have perfect price on for this game on insta-gaming.com