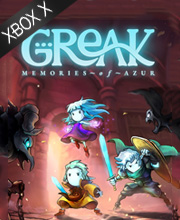 What is Greak Memories of Azur Game Code?

It's a digital key that allows you to download Greak Memories of Azur directly to Xbox Series X from Xbox Live.

How can I find the best prices for Greak Memories of Azur on Xbox Series X ?

Allkeyshop.com compares the cheapest prices of Greak Memories of Azur on the digital downloads market to find the best sales and discount codes on trusted stores.

Greak: memories of Azur is an action-adventure platformer with Metroidvania elements in it, you take on the role of three magical Courine siblings Greak, Adara, and Raydel refugees trying to escape the land of Azur due to an Urlag Invasion, you can alternate control between them and use each of their unique abilities to your advantage solve environmental puzzles and defeat the Urlag’s that block your way. While the war between the Courine and the Urlags has been going on for a long time, it’s just recently reached the Courine’s homeland, at the start of the game the siblings will be separated and your main goal will be to reunite them with the ultimate goal of escaping.

All in all, there’s a lot to like about Greak: Memories of Azur. Combat is fun, traversal is engaging and the tale is told well, with the plight of the characters really sucking you in. There’s a little too much fetch questing going on for my liking, and those respawning enemies can do one, but on the whole, this is something worth checking out.

All in all, Greak: Memories of Azur is the very embodiment of a game of two halves. It looks incredible, there are no two ways about it, and when playing as a single character, the gameplay is extremely good. It’s in the later stages when trying to manage three characters at once that annoyances creep in.