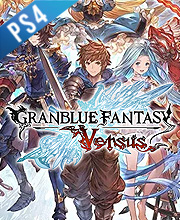 What is Granblue fantasy versus Game Code?

It's a digital key that allows you to download Granblue fantasy versus directly to Playstation 4 from PSN (Playstation network).

Allkeyshop.com compares the cheapest prices of Granblue fantasy versus on the digital downloads market to find the best sales and discount codes on trusted stores.

Granblue Fantasy: Versus is an action-packed fighter with a colorful cast of the title’s most powerful crewmates. Offers a unique fighting style that you will surely love.

Granblue Fantasy Versus is a fantastic game and an early pick for fighting game of the year.

Even with its issues, Granblue Fantasy Versus is still hands-down one of the most beautiful and accessible fighters I’ve played in years.