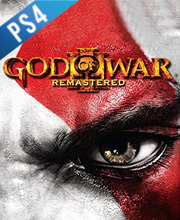 What is God of War 3 Remastered Game Code?

It's a digital key that allows you to download God of War 3 Remastered directly to Playstation 4 from PSN (Playstation network).

Allkeyshop.com compares the cheapest prices of God of War 3 Remastered on the digital downloads market to find the best sales and discount codes on trusted stores.

Here is a way that will certainly make you a fan if you weren’t already from the previous installments of the series!

This is a remake of one of the four previous games. In God of War Remastered, you control Kratos who wants revenge on the gods of Olympus through epic battles.

In short, this remake is good news for fans of the series as it is in all respects a success!

Visually, the game has not aged and better yet, the facelift is magnificent. The artistic team has put in a lot of work to create the most beautiful game of the saga.

The game gains fluidity and the development of the game characters close to perfect in terms of detail.

Regarding innovations, we discover with pleasure a photo mode that can capture moments of your adventure, the beauty of the game doing the rest!

This redesign therefore appeal to owners of the previous games but it will also delight new players.

one of the best fighting action games out there, great gameplay worth buying

Great game, interesting storyline and great graphics. One of the best Action games on PS3.

One of, if not, THE best games on PS3. The sheer brutality and amazing storyline of the God of War franchise is just so unbelievable. 10/10.