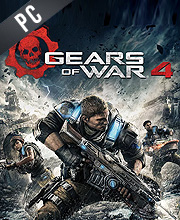 What is Gears of War 4 CD key?

It's a digital key that allows you to download Gears of War 4 directly to PC from the official Platforms.

How can I find the best prices for Gears of War 4 CD keys?

Allkeyshop.com compares the cheapest prices of Gears of War 4 on the digital downloads market to find the best sales and discount codes on trusted stores.

Gears of War 4 takes place many years after the events of gears of war 3, the war with the locusts is over humanity was nearly wiped out, but for a while there was peace. A new threat seems to be looming over the horizon, play as JD Fenix with his friends, Kait, and Del as they rescue their loved ones from a new monstrous enemy.

Gears of War 4 is directed by a new generation of creators, shares a lot of similar narrative structures to the beloved first piece of the trilogy it succeeds, and is an experience you’ll walk away from with a big smile on your face – in campaign, Versus, and Horde modes alike.

Gears of War 4 is the best Gears yet. Don’t expect a revolution, but a refinement of all of the aspects that make Gears great, including an over-the-top, almost cartoonish campaign, and a kick-ass upgrade of Horde mode. It’s also a flawless representative of Microsoft’s new “Play Anywhere” and Universal Windows Platform initiatives.

With a good balance of a quality campaign, multiplayer, and cooperative modes, there’s something for just about everyone to enjoy.

Find all the best prices for Gears of War 4 DLC’s on Allkeyshop!

Gears of War 4 is still a good game from a great FPS series.

Gears of War 4 is a really great title. Microsoft has proven that this franchise can be continued by someone other than Epic Games, and The Coalition is certainly a great choice