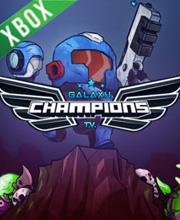 It's a digital key that allows you to download Galaxy Champions TV directly to Xbox One from Xbox Live.

How can I find the best prices for Galaxy Champions TV on Xbox one?

Allkeyshop.com compares the cheapest prices of Galaxy Champions TV on the digital downloads market to find the best sales and discount codes on trusted stores.

Are you ready to become the champ? Galaxy Champions TV is a super intense top-down close arena shooter inspired by the classic arcade game Smash TV. Get powerful weapons and power-ups, kill a huge amount of enemies, level up, unlock upgrades, and beat all the bosses to become the champion of the most violent TV show of all time.

If you are a gamer of a certain age then you’ll discover that Galaxy Champions TV is very much the spiritual successor to the classic Smash TV. It’s fast, it’s furious and it’s damn hard, yet it’s perfect for a quick blast when you have a few minutes to spare. Perhaps it could provide a little more in terms of game length, but then there’s the Nightmare difficulty to complete for those looking for it.

Zoom 1m 3m 1y All
Track product
XBOX ONE GAME CODE : Use the Digital Code received by mail in your Xbox One account to download Galaxy Champions TV from the Xbox Live. Internet connection is required. Please read the store description about any language or region restrictions.
Standard Edition
Compare Choose & Buy Download (772)