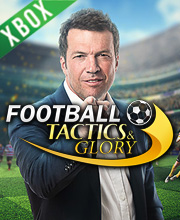 It's a digital key that allows you to download Football, Tactics & Glory directly to Xbox One from Xbox Live.

How can I find the best prices for Football, Tactics & Glory on Xbox one?

Allkeyshop.com compares the cheapest prices of Football, Tactics & Glory on the digital downloads market to find the best sales and discount codes on trusted stores.

You found and took over an budding team, bringing it to the top of world football. You make fascinating choices along the way, “battle” in tactical bouts, and RPG-style level up your players.

Football, Tatics and Glory is a novel football manager game and sets itself apart from the larger franchises by being more compact and allowing you to be more involved in the game with the turn-based action on the pitch. But with a save facility that needs a red card and the action showing more reliance on luck than strategy, this game may struggle lasting the full 90 minutes.

Perhaps things would be a bit more positive if you picked up the Nintendo Switch version of Football, Tactics & Glory, as it suits that “on the train” type experience, whereby on the home console it doesn’t quite feel right. That all said, if you’re a football fan, want something a bit different and love to have a challenge then consider seeking out Football, Tactics & Glory.