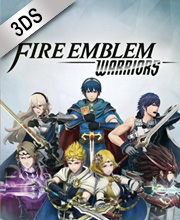 It's a digital key that allows you to download Fire Emblem Warriors New directly to Nintendo 3DS directly from Nintendo eShop.

How can I find the best prices for Fire Emblem Warriors New on Nintendo 3DS ?

Allkeyshop.com compares the cheapest prices of Fire Emblem Warriors New on the digital downloads market to find the best sales and discount codes on trusted stores.

Fire Emblem Warriors is a strategy, role-playing video game that is developed by Team Ninja, Intelligent Systems, and Omega Force and is published by Koei Tecmo Games Co., Ltd.

In the Kingdom of Aytolis, new hero warriors appeared which came from across the history of Fire Emblem. They join together to face the immeasurable enemies and to restore the mysterious Shield of Flames to stop the Dragon from spreading chaos across the land.

Unlock playable characters as the game progresses, each with different characteristics, attack power, weaponry, combination moves and voiced dialogue. Change between heroes anywhere on the battlefield to utilize and increase attack and defensive powers and lead the way to victory.

Materials and gold earned can be used to upgrade hero characters, weapons, armors and more. A series of combination of extreme combat and strategic Fire Emblem gameplay offers to take on challenging action-packed battles that is new to the series.

Great game for the fan of the serie fire emblem! You can find all your favorite characters