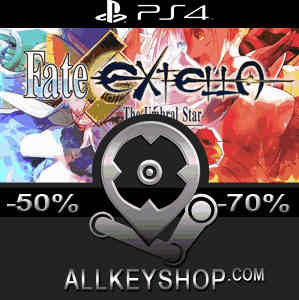 What is Fate EXTELLA The Umbral Star Game Code?

It's a digital key that allows you to download Fate EXTELLA The Umbral Star directly to Playstation 4 from PSN (Playstation network).

Allkeyshop.com compares the cheapest prices of Fate EXTELLA The Umbral Star on the digital downloads market to find the best sales and discount codes on trusted stores.

The story continues from the events of Fate Extra after the Holy Grail War. The war has been won by Nero and her master taking control once again over the Moon Cell Automaton Computer. This special computer has the power to actually grant a wish. Also, in their hands is the regalia ring which shows proof of their kingship! However, peace is being threatened as a new enemy that also has a regalia appeared.

This single player game will have its players take on the role of a ‘master’ that can control spirits that they call as ‘servants’. The ‘masters’ can be personalized by choosing their gender as well as assigning their names. Servants can be divided into eight classes namely: Saber, Archer, Lancer, Caster, Assassin, Rider, Berserker and Extra Class. Each of these servants will have different fighting styles and there are 16 playable servants all in all.

Servants can also have special attacks like combo attacks and many more.

Dive into a new adventure and play Fate Extella: The Umbral Star.

BOX GAME : This is Fate EXTELLA The Umbral Star PS4 Box Edition (DVD-CD ROM). This is not a downloadable product. Please read the sellers page for any additional costs (taxes, shipping), delivery time for your country and languages available.
PLAYSTATION CODE : This a Playstation Game Code to download Fate EXTELLA The Umbral Star PS4. Activate the code on the Playstation Network. Read carefully the store description about any language and region restrictions.
Standard Edition