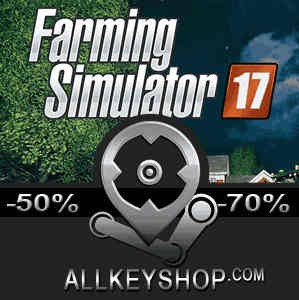 What is Farming 2017 The Simulation CD key?

It's a digital key that allows you to download Farming 2017 The Simulation directly to PC from the official Platforms.

How can I find the best prices for Farming 2017 The Simulation CD keys?

Allkeyshop.com compares the cheapest prices of Farming 2017 The Simulation on the digital downloads market to find the best sales and discount codes on trusted stores.

Established in 2008, Farming Simulator has become the most famous simulation game from the last years and has sold over 2 million copies.

This new episode of the Farming Simulator series have a partnership with Lely, the Dutch manufacturer of agricultural machinery, which notably includes the first milking robot among 40 other companies already present in the game. There is even a brush for cows.

In this farming simulation you need to properly manage your business to make a profit and invest in new machines. You can take care of a dairy farm and also cereal crops to feed your flock. You can choose from a large range of agricultural machinery: mower, Tedder… Mods will also be available to further increase the possibilities of the game.

Be ready for this new adventure!