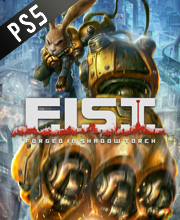 What is F.I.S.T. Forged In Shadow Torch Game Code?

It's a digital key that allows you to download F.I.S.T. Forged In Shadow Torch directly to Playstation 5 from PSN (PlayStation Network).

How can I find the best prices for F.I.S.T. Forged In Shadow Torch on Playstation 5 ?

Everything about this title is a joy and great, engaging gameplay is complemented by a beautiful world that springs to life on the PS5 both visually in its setting as well as its characters and stories. Top this off with a great protagonist and you have a game of the year contender in every respect. Metroid Dread? Who needs it?

F.I.S.T.: Forged In Shadow Torch is a gorgeous Metroidvania that tells a much better story than any anthropomorphic narrative has a right to tell. It’s emotional and engaging during each scene brought together with challenging moments of action and puzzle-platforming.