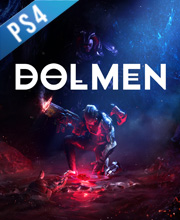 What is Dolmen Game Code?

It's a digital key that allows you to download Dolmen directly to Playstation 4 from PSN (Playstation network).

Allkeyshop.com compares the cheapest prices of Dolmen on the digital downloads market to find the best sales and discount codes on trusted stores.

Dolmen is a science fiction and cosmic horror-themed souls-like action RPG developed by Massive Work Studio, you play as an explorer trying to find crystals on the planet known as Revion Prime. These crystals called Doleman have the unique property of being able to interact between different realities revolutionizing space travel and galactic exploration as we know it. After each encounter in Dolmen, you will get stronger you will be able to choose from a variety of weapons and moves at your disposal, you can even switch between melee and ranged combat with ease so you can overcome any challenge the planet of Revion Prime throws at you.

This Edition of Dolmen contains the base game plus the Rebel armor and weapons set for preordering the game and buying or buying it at launch.