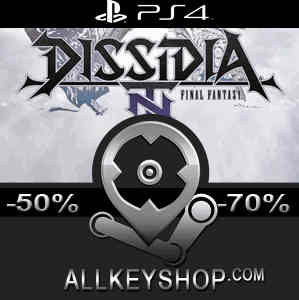 It's a digital key that allows you to download Dissidia Final Fantasy NT directly to Playstation 4 from PSN (Playstation network).

Allkeyshop.com compares the cheapest prices of Dissidia Final Fantasy NT on the digital downloads market to find the best sales and discount codes on trusted stores.

Dissidia Final Fantasy NT is an action, role-playing, fighting video game that is developed by Team Ninja and published by Square Enix and Koei Tecmo.

A conflict between the goddess of protection Materia and the god of destruction Spiritus is commencing in the dimension of World B. Because of this, the warriors of Cosmos and Chaos has been summoned.

Enjoy an 3-on-3 combat where players are able to switch between the three chosen characters. Create your party by choosing from the four available classes which are power-based Vanguards, agility-based Assassins, ranged-based Marksmen, and unique trait-based Specialists.

Brave attacks are also available where there will be an increase in the player’s Bravery level based on the amount of damage done. A Bravery Break is also triggered when your player gets attacked while the Bravery is Zero. Other attack modes are also available in the game.

Dissidia Final Fantasy NT is another great adventure that you wouldn’t want to miss.

ASIAN BOX GAME : This is an Asian import of Dissidia Final Fantasy NT PS4 in Box Edition (DVD-CD ROM). This is not a downloadable product. Please read the sellers page for any additional costs (taxes, shipping), delivery time for your country and languages available.
PLAYSTATION CODE : This a Playstation Game Code to download Dissidia Final Fantasy NT PS4. Activate the code on the Playstation Network. Read carefully the store description about any language and region restrictions.
Standard Edition