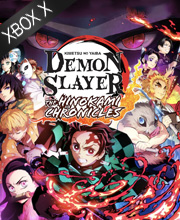 What is Demon Slayer Kimetsu no Yaiba Game Code?

It's a digital key that allows you to download Demon Slayer Kimetsu no Yaiba directly to Xbox Series X from Xbox Live.

How can I find the best prices for Demon Slayer Kimetsu no Yaiba on Xbox Series X ?

Allkeyshop.com compares the cheapest prices of Demon Slayer Kimetsu no Yaiba on the digital downloads market to find the best sales and discount codes on trusted stores.

Demon Slayer – Kimetsu no Yaiba the Hinokami Chronicles is a 3D fighting game (similar to the ultimate ninja storm series) based on the Demon Slayer Manga and anime series, the single-player campaign retells the story of the anime in a very condensed way up to the end of the first season of the show and leading up to the Mugen Train movie.

This Edition of Demon Slayer Kimetsu no Yaiba The Hinokami Chronicles contains the base game, a pack of Kimetsu Academy characters, Ingame Costumes, Avatars, digital currency, and additional digital accessories.