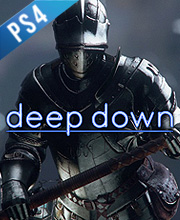 What is Deep Down Game Code?

It's a digital key that allows you to download Deep Down directly to Playstation 4 from PSN (Playstation network).

Allkeyshop.com compares the cheapest prices of Deep Down on the digital downloads market to find the best sales and discount codes on trusted stores.

Deep Down is an action–role playing single/multiplayer coop dungeon crawler videogame development by Capcom for PlayStation 4.

Deep Down is a single-player or co-op multiplayer with up to four players. Gameplay is said to be similar to Dragon’s Dogma and also to the Dark Souls series, but not so difficult.

The game takes place in a fantasy place with a medieval vibe, and dungeons are generated procedually.

The player has weapons and armour such as: suits of armor, pikes, swords ,shields. You will encounter creatures including shapeshifters similar to mimics (D&D), dragons and ogres.

The player starts in New York City in the year 2094. A member of the “Ravens”, has the ability to recover historical memories when he touches ancient objects.

Mysterious objects are discovered in Bohemia and the city has to pe explored in order to reveal all its secrets.

i liked it! is like a realistic dark souls﻿ It is good game thanks you allkeyshop