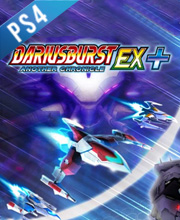 What is Dariusburst Another Chronicle EX Plus Game Code?

It's a digital key that allows you to download Dariusburst Another Chronicle EX Plus directly to Playstation 4 from PSN (Playstation network).

Allkeyshop.com compares the cheapest prices of Dariusburst Another Chronicle EX Plus on the digital downloads market to find the best sales and discount codes on trusted stores.

DariusBurst Another Chronicle EX+ is a side-scrolling shoot-em-up game developed by Pyramid Inc, the console port of the original arcade game from 2010 it contains new features like upgraded graphics, replay mode, and new missions. After the events of the first DariusBurst, the war with the Belsar Empire still rages on, after the Liberation of Darius from the Empire and the repair of the Hyperspace network, plans for a grand offensive against the Belsar using the Silver Hawks was on the horizon. Lead humanity’s vanguard and crush the Belsar Empire once and for all.