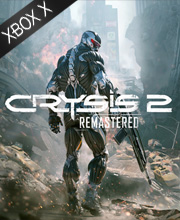 What is Crysis 2 Remastered Game Code?

It's a digital key that allows you to download Crysis 2 Remastered directly to Xbox Series X from Xbox Live.

How can I find the best prices for Crysis 2 Remastered on Xbox Series X ?

Allkeyshop.com compares the cheapest prices of Crysis 2 Remastered on the digital downloads market to find the best sales and discount codes on trusted stores.

Crysis 2 remastered is the remastered sequel to Crytek’s critically acclaimed FPS game Crysis, now fully optimized for today’s hardware. Play the single-player campaign in an all-new lens, suit up and carve your own strategic path of destruction through the open sandbox levels in this ultimate version of your favorite game.

The open-world sandbox is gone, replaced by a much more story-driven game. That becomes less of a problem as you get into the meat of Crysis 2, but those first few hours are a bit of a slog. Stick with it though and it is definitely a Crysis game with a much-improved Nanosuit, even if it is a vastly different Crysis game.